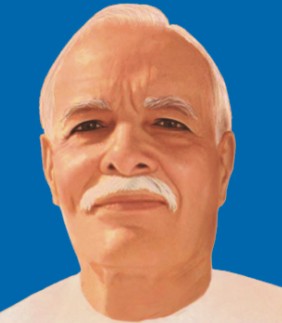 Though by birth he was an ordinary man, there were many special qualities in him, qualities apparent though indefinable, even at first glance. He had a delightful, indescribable attractiveness, a charisma which surrounded him like a glow. One felt even from a far the love, the humility, the heart-felt sincerity of his nature.

Even more, one felt the strength and there was the unforgettable, magnetic attraction of his eyes. His ways of living, his gentlemanly manner, his true devotion, won him friends and admirers wherever he set foot. Darkness and depression were unknown to this soul.

Dada Lekhraj was born in 1876 in Sindh province of the present Pakistan. Though his father was a schoolmaster by profession, he began his own career as a small wheat merchant. Later he entered the diamond trade. Almost by instinct, he developed great expertise in discriminating the value of different gems.

In a very short time, his reputation grew and his business became more and more profitable. Rajas and maharajas of the native states of India, as well as the British Viceroy became his friends and clients. They afforded him utmost respect - not merely because of his brilliant diamonds, but because of the brilliance they felt in him.

Dada did not have a great deal of formal education. But he had deeply studied philosophy and different religious texts. Being a great devotee, he would never compromise on his religious activities and living style. He was fond of going on pilgrimages and visited various pilgrim centers. He often invited sadhus and sannyasis to be his houseguests.

He enjoyed conversing with them on their religious understanding. He had great faith in religious teachers. Being a great philanthropist, Dada was always involved in charitable activities. He was always a selfless donor. He would sit with his uncle and together they would hand out their money to the lines of people who arrived in need of help.

With the establishment of the institution Prajapita Brahmakumaris Ishwariya Vishwa Vidyalaya, Dada Lekhraj was called Pitashri Prajapita Brahma, the father of humanity and people called him Brahma Baba. Pitashri Brahma followed the directions of God at every step of his life. He always had good wishes for everyone and carefully guided many to their predestined aim.

Pitashri (meaning father) was a picture of humility. He worked long hours, efficiently performing every type of service including the most menial work. The spirit of service, humility and dedication became ideal for everyone. He warned that one should not work for winning personal glory or name, fame and titles, for he considered one’s desire for praise and rewards as a subtle kind of begging and as a weakness of character.

Pitashri Brahma was a constant source of inspiration and wisdom for everyone. He taught the subtlest secrets of how to invoke in the self, divine attributes such as introspection. He spent a lot of time in solitude thinking deeply about the information which God was delivering through him. He re-educated his mind to comprehend from every perspective the meaning of contemporary events and eternal verities. He was able to see the whole world process clearly

Pitashri Brahma gave joy to others through his deep spirituality. His stage of soul-consciousness was so elevated and powerful that most of the people who sat near him felt that they were becoming more and more detached from their bodies. They noticed a divine light enveloping him on all sides and would see a strange radiance there. This experience charmed them so much as to make them long for the lasting joy of this experience.

After leading a life of highest order and principles, in which every of his action was filled with divinity and became ideal for everyone to emulate, Pitashri left his mortal coils in 1969 to attain angelichood.