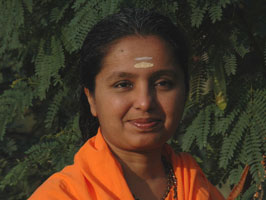 Swamini Pramananda, fondly known as “Ammaji”, is a spiritual guide, a highly regarded teacher of Vedanta and a Sanskrit scholar with over 30 years of teaching experience. Vedanta is the Hindu Philosophy which concerns itself with the ultimate nature of man “Who Am I?”

Ammaji worked in New York for ten years where she completed a Masters Degree in Microbiology. She has a strong scientific background and is familiar with our western way of thinking. She was the Hindu delegate in the Buddhist-Hindu and Yogi-Sufi dialogues in India, Cambodia, Nepal and Japan. Furthermore she was the a delegate at the United Nations Climate Change Conference in Copenhagen. Currently she teaches and supports many social programmes in poor communities in India. In addition, she organizes seminars and spiritual retreats throughout the world.